Watch LaterRemove Cinema Mode
Facebook Twitter Reddit Pinterest Email
In this first video — How things are getting better and the Grace Gravity of the Sun There are 4 videos here from the first and only conversation between Father Charlie Moore and Robert Muller who met one day out in a sunny backyard and had a conversation.

The first and only conversation between Father Charlie Moore and Robert Muller who met one day out in a sunny backyard and had a conversation. 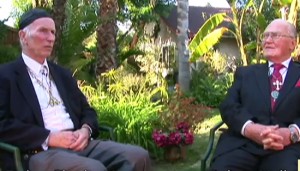 Most people are really good and things are getting better all the time. We’re trying to get rid of some of the stuff of the dark ages. It gets in the way.
We make the world better, by making our own world better and seeing it in everyone around us.

Gravity operates in space/time and Grace operates beyond it.

Time brings cycles of change according to the grace gravity of the sun and the stars as they move away or toward each other they pull our feelings and hearts with them. It is literally happening.

Cooperate with the rising Grace Gravity of the Sun. The Angels are the Stars.

ABOUT Father Charlie Moore
A Spiritual Leader, Historian, Scholar, Former Catholic Priest, Lawyer
Fr. Charlie graduated from Stanford University (AB 1949, LLB 1951), was admitted to practice law in California, and was elected District Attorney of Santa Cruz County in 1954. He was ordained a Roman Catholic Priest in 1964 and holds degrees in philosophy and theology from Catholic University. His avocation is language: he has studied Spanish, French, Italian, German, Welsh, Latin, Russian and Japanese and is acquainted with Sanskrit and Chinese.

“I’ve got good news for you. Your original innocence is intact.
And there is no such thing as original sin.
Innocent does not mean not guilty; it means uninjured.
Your pristine innocence is your power to know the truth,
the self-evident truth. Remember?” —Charles L. Moore

NO DREAM IS TOO BIG

Author Most Of All They Taught Me Happiness
Robert Muller (born 1923 in Belgium) was an employee of the United Nations. Assistant Secretary General for 40 years. Coming from a place more concerned with gross National Happiness than gross national product. His ideas about world government, world peace and spirituality led to him become known as the “Philosopher” of the UN.

He would often close sessions of the UN by playing Ode To Joy on his harmonica. Ode to Joy describes a world where all people will be brothers and sisters.
Hear him play Ode To Joy on the Harmonica. Go to: http://robertmuller.org/ and Click Robert’s Harmonica, scroll down to the bottom where it says Ode to Joy and click.

Let the good news be
incarnated in you
Proclaim your belief
In humanity
In our success
In our further transcendence
In our peace, justice
and happiness
In the construction of the
Planet of God
Think of it
Feel for it
Speak of it
Work for it
For all we think, all we feel,
all we say and all we do
Must not hinder, but help
The great design of God
Our Cosmic destiny
Our further ascent and evolution
Towards the permanent reign of
God on our miraculous planet.”
—Dr. Robert Muller
Robert Muller 1923-September 20, 2010

How to Raise Your FREAK-quency